Wherever You Are Ain't the Place to Be

The older I get, the more I think about what's going to be running through my mind om my deathbed. As my joints begin to stiffen, my a**hole begins to sh*t cacti and the bald spot in the back of my head is approaching the diameter of a beer coaster, I think of all the things I hate to do and avoid them as much as possible.

Surprisingly, "work" did not make the list. I'm a firm believer that if that is the case, a mass mailing of resumes is truly in order. Some honorable mentions that also do not appear are: the toilet (when I am constipated), the wrong line in the supermarket (when foodstamps are issued), the DMV or other city, county or state office, and the mall.

THE TOP 5
5. Court. Nothing makes me feel like 'brown trash' more than having to sit in court with shoplifters, drunks and wife-beaters. Fortunately this only happened once, and it's something I'd rather not repeat. I'll learn to hold my tongue at the next airline customer service desk from now on. This is particularly worse if it happens in Cheektowaga. There is a high 'whiskey-tango' factor, with de rigueur Buffalo Bills attire of players not seen on the squad since the 90s. Pathetic pleas of "It was only a $20 sweater" from plain jane high-schoolers further pains the experience.

4. A Vehicle. If I had to live anywhere that warranted a 30+ minute commute, I would definitely have to take the aforementioned vehicle and drive it off of the nearest bridge. I also hate being caught in a heavily trafficked suburban artery. I seethe miserably, grind my teeth and feel a nervous twitch in my lower left eyelid.

3. Hospitals. Is there any good reason to spend time there? They've depressed me ever since my mother passed away. While there is an up-side, such as childbirth, (or if, for instance, somebody jammed a phillips-head screwdriver in my ear, I can't think of a better place to have it removed), generally there aren't too many good reasons to find yourself at one. It's even worse if you don't get courteous, caring service.

2. Church. Weddings, baptisms... mass... Hopefully if there is a god, he'll be understanding after my funeral, but all that kneeling, standing, droning and off-key singing actually peeves me. I understand that some people need 2000 year old folklore to make their life meaningful and to give them a warm, fuzzy superiority complex. Others need it to keep their ids in check. It serves neither purpose for me. If you hear a rhythmic tap of the hymnal clip on the back of your pew, yeah... that's me. I did have a proud parent moment walking by the ubiquitous bloodied up statue of Jeebus and having my 4 year old son ask, "Who's that guy?"

1. Banks. Nothing makes my stomach burn more than having to wait in a line at a bank. Even if there are no other customers around, the inefficiency at these places cause you to wait 10 minutes for a dead-eyed dolt who can't make a decision on their own to hand over a roll of nickels. It's gotten even worse since all this terrorist hoopla started. I've got five accounts at the same bank and they still manage to make me feel like they just met me by asking me a million questions and for 90 identifications. I don't think I have enough money kicking around to funnel cash to a self-respecting terrorist for purchase of a pack of firecrackers.

There you have it. If you see at any of these locales, please have the courtesy of putting me out of my misery.
Posted by Prego at 1:06 PM No comments: 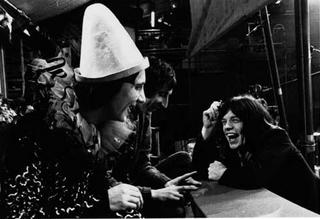 This past weekend, the O-Dog and I went shopping for a new music DVD to add to our collection. Since he's been belting out Sympathy for the Devil better than Mick himself for the past couple weeks, we opted to pick up a copy of the Rolling Stones Rock and Roll Circus. If this was going to be his first foray into Stones-ville, it'd better be a good one. A geriatric Mick might do more harm to the O-Dog's rock psyche than good, so vintage Stones it is.

We watched several acts, such as Jethro Tull, Taj Mahal, Marianne Faithfull and the Who. John Lennon and a star-studded supporting cast belted out "Yer Blues." Everything was copacetic in Rock-dom until the next song, in which John was joined

onstage by his wife. It was at this point that I noticed the O-Dog was no longer sitting next to me on the couch. I saw his little butt hanging off the edge, and his head buried beneath the cushions.

"What's the matter, Rock?" I asked him. (Rock is short for Rockstar; one of his many nicknames.)
"I don't like this one," he replied.

To be honest, neither did I, but I try to let him be his own little tastemaker and not let my own opinion sway his. I gave him a little kiss and skipped a couple chapters on the disc.

Two or three songs later, the O-Dog got over his encounter with Yoko Ono; Daddy, on the other hand, was left with his musings. If a child can sniff lack of talent a mile away, how then did Yoko get away with it? Does the fact that she was John Lennon's wife endow her with the rights to warble and wail in front of a huge audience? And have her shrills met with applause? We are indeed dupes.

I was left to ponder (and this will likely twist the armpit hairs of the staunchest of feminists) is Hillary Clinton just another Yoko? I am not postulating about the qualifications of a woman President. I could give a rat's ass about gender. There are, however, millions of women in the United States. Now the best this country could do with the male population fell miles short of anything worthwhile these past two elections. Are we to put all of our proverbial eggs in the basket of a cuckolded coattail rider whose track record is in its infancy, just because she happened to be a President's wife and has charisma?

This is the same country that elected a wrestler to office in Minnesota, and a hack of an actor to the governership of California (and the White House, lest we forget Reagan.) If we are en route to being governed by the cult of fame, I vote for the hot little biscuit that played Topanga on "Boy Meets World." Better yet, I cast my vote for Yoko Ono, right before I bury my head in the couch with my son.
Posted by Prego at 12:32 PM 1 comment:

How to Silence a Self-Proclaimed 4 Y.O. Chocoholic 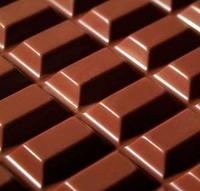 At the risk of turning the O-Dog into an Hispano/Celtic Augustus Gloop, I came across a recipe that'll guarantee the family blood will be flowing like toothpaste all winter. Hell, even the Fletch likes. It's the kind of shit you wish your parents would have let you have.

The O-Dog has had a long-standing love affair with cacao. As a two year-old, he'd amaze patrons at the local sweets shop as he would down a 32oz. cup of chocolate milkshake without taking his lips off of the straw. I used to love watching the plastic lid fog up with every breath he took. Little bro is toddling down that same path of addiction.

Anyway, throw this one on the stovetop to thwart that cabin fever.

2 Cups Half & Half
1 4oz. Bar of the serious shit chocolate

Heat up one of the cups of Half & Half until it boils; turn down heat and throw in the smashed up chocolate bar. Stir gently until the chocolate melts.
Add the other cup of Half & Half and crank up the heat.

Dilute a cup or two for the kiddies with milk, set yours aside and top it off with a sprinkle of cayenne pepper and some cinnamon.

Enjoy the 10 or so minutes of peace and quiet before they finish their beverages, the sugar kicks in and they go back to killing each other on the living room floor.
Posted by Prego at 10:39 PM 3 comments:

I know that my mouth will go on.

It's very difficult to find yourself in agreement with someone, despite their good intentions, when they unravel and eschew reason and clarity for the guise of fervor and 'passion'.
Posted by Prego at 12:11 PM 2 comments:

Leave me where I am, I'm only sleeping. 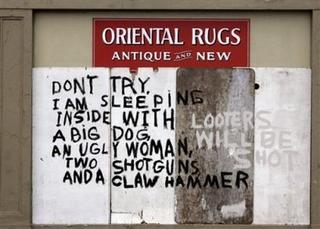 There's a reason I stopped watching the news, and the past week has reiterated my point. Though I feel for the victims of the hurricane related tragedies, I care not to lose what little faith I have in mankind by listening to the media report of murders,
looting and chaos in the Big Easy. I found long ago there is very little for me to gain by rubbernecking someone else's misery at 6 and 11. There is nothing I can do but drop off a box of clothes to donate, perhaps make a financial contribution and thank goddamned heaven that all I have to do is shovel snow and chisel off a stubborn layer of ice from my windshield from November to April.

Speaking of dreadful winters, I just took the O-Dog to see the March of the Penguins yesterday. Though I had read the film had a bit of death in it, I thought the pros outweighed the cons, and opted to take him anyway. I figured I'd explain all the dead penguins away by telling him they were "sleeping." It worked. In all honesty, I was curious to see the film myself. I left the theater with an overwhelming feeling of love for my boys and wife, a desire to have another baby, more respect for animals and less for mankind. Penguins, after million of years of evolution, cooperate and work together for the survival of their offspring and species. As they huddle together en masse, braving temperatures that would freeze piss mid-stream, they realize that their survival and that of their newborns depends on full cooperation with all the other members of their colony. I'm sure they figured it out a couple of million years ago when a sensible penguin told his bickering brethren to "chill the f*ck out," lest they freeze their collective asses off fighting over whose turn it was to sit on the outer edge of the huddle.

So, as we gasp in horror at images of floating corpses and bodies in wheelchairs and cringe at stories of alleged murder, rape and pillaging, or debating whether there is anything 'racist' about the whole tragedy, we can only hope that someday we might figure out what penguins, bees and ants have known for eons. What that might be, I don't know.

In the meantime, may I never accuse anyone of "acting like an animal." That would be a compliment.
Posted by Prego at 9:04 PM 2 comments: